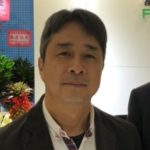 I started to work for a company in 1992, when the internet was in its early days and the bubble economy just burst in Japan. Since then, I spent my career aimed the rise of “digitalization” and “globalization”.

I have engaged in launching the business in China and dealt with Taiwanese makers which gradually, but rapidly dominating the world’s PC market under swift and flexible decision-making. I am so fortunate to have such experiences, as well as I had opportunity to see Japanese culture from outside of Japan.

I have decided to establish this company to embody my wishes to make the most of my invaluable experiences for;

Rediscovering Japanese culture and local businesses and contribute to their revitalization, and

Becoming the cross-border bridge, especially between Taiwan, where I had spent 10 years, and other Asian areas.

What does “Plus K” means?
Business Activity